Van of Constant Sorrow Part One: The Sads and the Fury

If Rich was panicking, I couldn't tell. But at mile zero of our odyssey, the tone was already set:

"It'll start... it'll start. It just... don't worry... it'll start." Turning the key to a wingey chug with no fire. Backing off and trying again. More wingeing. Giving it a moment and trying once more. Then again. Stressing the starter and eventually just flooding the engine.
"Ok, let's... we just need to let it sit for a while. It'll start."


And it would.
I had full confidence in that. It's... just a cute little phase the van is going through these days.
Not starting sometimes.
It's... cute.

The plan? End up in Bentonville, Arkansas by the weekend. At the very least in time for our event on Saturday.
The course? Errrr....

Despite the ambiguity in our trajectory, I'd actually thought about our potential meandering and where it should take us quite a bit. I just... thought about it in that way that I tend to think about things. Less a linear timeline of sense and sensibility and more an accidental (or intentional?) conflagration in the fireworks store. One thousand points of exploding light. In every direction.

We'd roughly agreed on Knoxville as our first stop, but I'd imposed two very strict caveats on our trip.

One: Avoid rain.
And
Two: Wait for no one.

Number one is a no brainer. If you have fluidity of choice, you seek aridity. If your destination shows unridable wet, but you could find sun and warmth instead... fucking duh!
Knoxville was looking dicey. Potential storms all day. So in my mind was the potential for a chaotic southernly route as well. Head south to ride FATS in Augusta, GA. Then across northern Alabama. Ride Anniston. Ride Oak Mountain. Maybe stop in Oxford, Mississippi for a meal so that I could have a moment of osmotic literary inspiration. Up through Memphis and on to Hot Springs or Syllamo.
Until the moment we got in the van, we didn't know which way we'd even head. Knoxville won out. Lucky.

Caveat number two, btw, is a bit trickier. But... if you grew up with a friend or older sibling who liked to convince you to do things with them, but then, more often than not, couldn't do those things at the time they said, but then said they could maybe do them later, so you waited until they could, but then, as it turns out, they still couldn't... and by then it was too late for you to do fucking anything...
you understand.
Wait... for no one.


Rich had so much stuff.

It may not look like it... but that's just because I just couldn't get the angle right. That bag... is huge. Rich can fit inside of it. Easily. And I admit, when I saw it, I felt a momentary pang of stress. Yes, more stress than the van not starting. I mean... that's just what vans do. But that bag? It would take up ALL THE ROOM. And there isn't much room in the van. The milk crate got a pass, simply because I could pile my stuff inside of it too. And the chair we never used also gets excused... because you never know. But that bag. That fucking bag.
Meanwhile, while I was stressing about Rich overpacking, Rich was stressing about the bikes. Specifically about my bike maybe kind of touching his bike, and about how, if given a half a chance, it might try to vibra-saw his frame in half as we trundled down the road. I mean... I get it. Finding out at the trailhead that the left ESI grip you were counting on has been sliced in half and you get to ride glove to carbon for the next couple of hours is deflating. But the van don't have no hitch. And I ain't got that hitch money. So trunk rack it is. Eventually he got a system that he was happy with and he was in charge of bikes for the next week.

When we got to Knoxville, without incident, Scott, incidentally, wasn't ready... busy as he was learning how to service an e-bike.
But then, having skipped lunch, neither were we. And we had time. So I gave rule number two a little leeway. And as our friends Gary and Chris had "left the conversation" about riding before we even arrived, there were less balls in the air. Literally. So we ate tamales with Daniel, who had taken the day off to join us. Then piled into the TVB Sprinter and headed to the trails... which are pretty special.
And when we did roll out, even if the pace occasionally hurt so good, and even if Scott kept death-coughing plague into the air ahead of me.... I was very much in my happy place.

Which is to say... riding my bike... somewhere else. 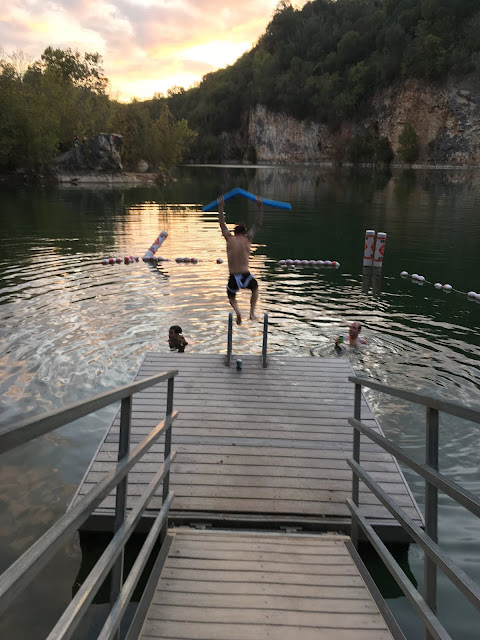 Look for Part 2 wherever you look for things like that. Coming soon.