Love Stabs, Trainers, and Politics: longform with my enemy. 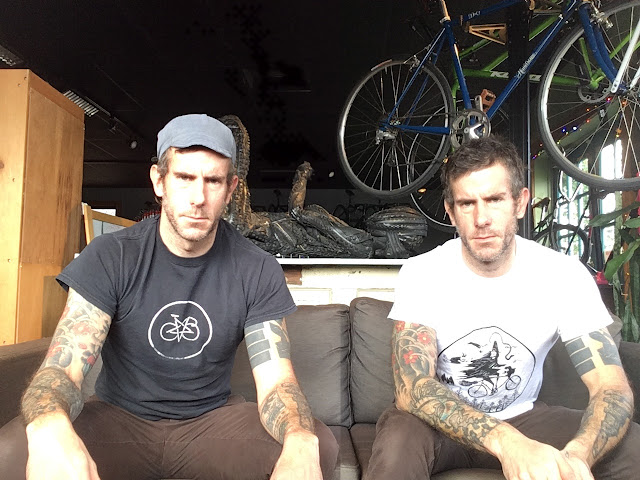 A: Is it? Name something good you've done for me.

A: Ha! You say that. But you've also tried to kill me. Multiple times.

Q: Please. I was trying to help you.

A: By stabbing me with a screwdriver?

Q: Love... is complicated. Sheesh. You know this.

Q: I know. So... where you been, emo-boy? Literally tens of people have been asking. Alright... maybe just one. And no, it's not who you were hoping.

A: (Sigh)
I've been around. Just weathering them brain fires, you know? Just... playing the game. Distracting myself through one day. Then another. Then another. It's all distraction. All about tricks.

Q: Yep. It's all about turning those tricks.

A: Like... this winter. I'm fucking terrified of it. I barely made it through last winter, right? How the fuck am going to make it through this one?

Q: Cool story. I hate trainers, by the way.

A: So do I. But I'll tell you something... If I only have one hour to ride? And I can either do an unfulfilling loop through garbage suburbs... full of brick and siding and dying azaleas and Bermuda grass and bitter, unhappy couples and white Audis and mulch and bags of dogshit left on the sidewalk because people are too lazy to carry them to a trash can....
OR I can do a workout on the trainer so hard that I literally can't think about anything AND I cry blood?
Which would you choose?

Q: Hmmmm. Yeah... that blood thing sounds pretty good. So are you on Zwift and all that shit?

A: No. Nor do I see that happening. But who knows? Winter makes you do weird shit, right? I have this Kinetic Trainer and this INRIDE app on my iPad. I scroll through the workouts and say "I wonder which one of these will make me sob and shit my bibs?" And choose that one. Then I pedal hard enough to make a yellow line follow a green line. And cry. And shit my bibs.

Q: Hmmm. Delightful. So why aren't you bonkers strong on the bike if you train so hard?

A: Ha! Train? You mean like... with a plan? Like... a goal? Like... peaking and tapering? Like... paying attention to my diet and having rest days and drinking enough water and getting enough sleep and not getting pass-out-drunk every night to desperately try and hide from demons?

A: Hmmm. I don't know. Apathy? Bad genes? And who says I'm not bonkers strong?

Q: Everyone. Is it fair to point out that it's not even close to winter yet? I think it was almost 90 degrees the other day.

A: Pfffft. I start dreading winter in like, mid-April. So...

Q: Fair enough. Wait... weren't you supposed to be at INTERBIKE last week?

A: It just didn't happen this year. Ben, who was my right hand at the shop (And also my brain. And gut. And possibly my left kidney. Among other things...) finally decided to go to law school. Rightly so, because he's (kind of) smart(ish.) And come on. pursuing bike retail as a future? You're either insane....Or dumb... Or both. 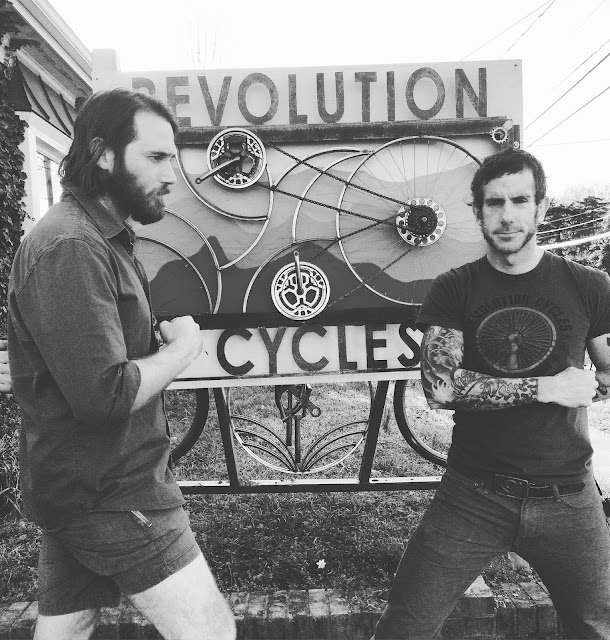 Q: So which are you?

A: God, I'm so far off the spectrum of being insane and dumb that it almost doesn't even register. Like a wheel spinning so fast it looks like it's going backwards.
Anyway... I just needed to be at the shop lately. So... yeah. No Interbike.
And yeah... I'm bummed.
Because whatever the fuck people say about "Ugh... Interbike is the worst. I'm so traveled and jaded. I'd rather be making coffee outside in a hot spring wearing my bedrock sandals on a gravel road with my fucking $5000 titanium bike"... or whatthefuckever...
...I never didn't have fun at Interbike. 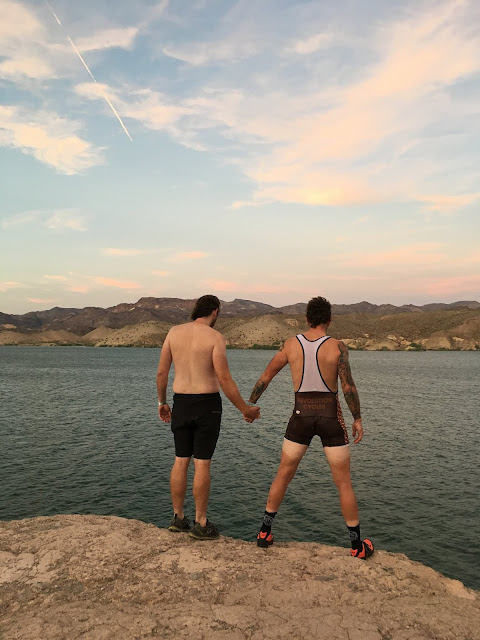 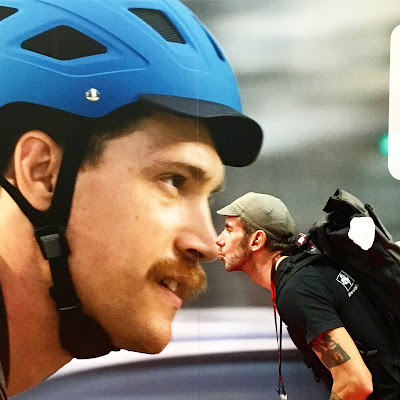 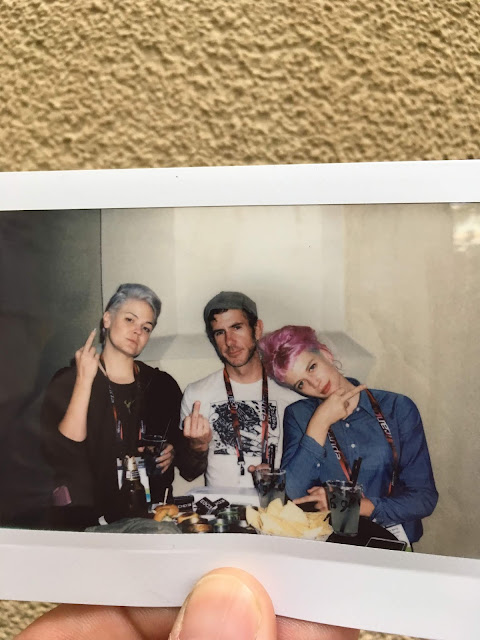 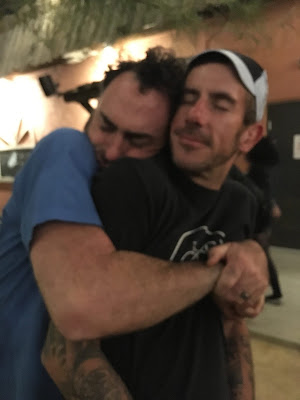 Q: So you don't like Bedrock Sandals? All your buddies love them.

A: Nothing against Bedrock. I'm just not a sandal person. I'm all about tall socks. Tight kits. Top buttons. No sleeves. Mullets. Neck tubes. None of it makes any real sense.
But mostly? It's having a strap between my toes. (shivers dramatically) It's... unpleasant. Like someone touching my wrists. Or having fabric in my mouth.
Plus this is what happened the last time I wore sandals. So.... 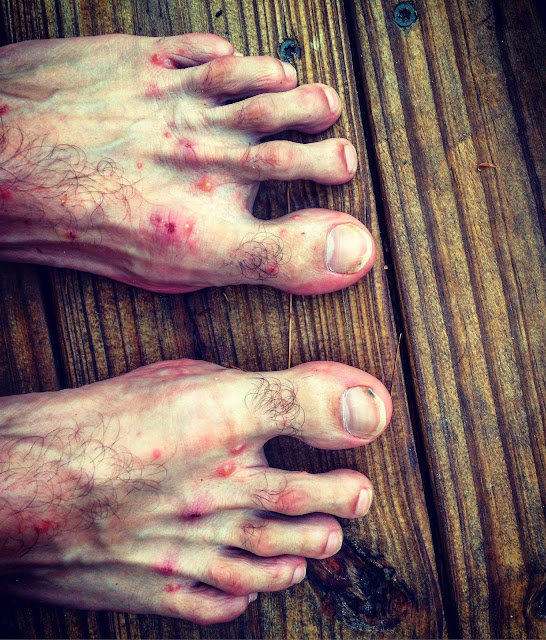 Q: Gross. Ummm... Fabric in your mouth. Is that a thing? That happens?

Q: That you know of.

Q: What about travel? Any of that on your horizon?

A: No. Not that I can see. And yes... I'm losing my fucking mind about it.
I know I'm a broken record and all that... but staying in one place fucks me up. Routine is anxiety. Movement is peace.

Q: Oooohhhh that's really deep. So where would you go?

Q: What about events? That's a good way to force travel.

A: You think I don't know that? It's why every year I say YES to so many events. Tell myself that I'll be there. Rebecca's Private Idaho. Shenandoah 100. Mah Daah Hey. Tour Divide. Trans North Georgia. True Grit. Landrun. Sea Otter. Keystone Gravel. UnPAved. Baja Divide. That middle of February fat bike race whose name I forget. Fucking anything. Anywhere.
Grinduro is this coming weekend... and at one point, Giro was even going to give me gas money to drive the van there and be a social media dipshit about it.

A: What always happens. Entropy and disorder. Decay. The falling apart of things.

Q: What if you just close the shop for a week or so and just do it?

A: Yeah. Maybe? I need to figure some shit out. 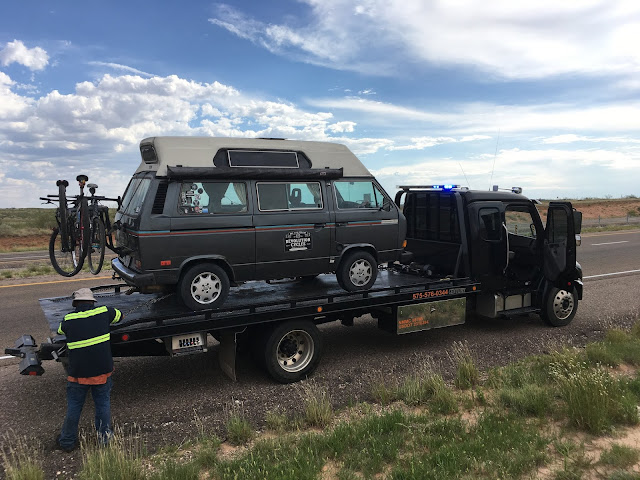 A: The van is fine. I think. I mean... it needs some work. I'm not quite sure that the radiator is operating at 100%. There's an electrical short somewhere that makes the windshield wipers turn off whenever I hit the brakes. Sometimes the lights want to flicker out and the only way to keep them on is to press on the relay a certain way. And there's a rattling noise somewhere around the front right wheel. I'm always driving when I hear it, so can't quite diagnose it. Fun. stuff. But the van is fine. I mean... yeah, the fuel pump shit the bed somewhere in New Mexico on the romp I took with Dorrit and the not-so-younglings... And we spent more than a few hours on the side of the road in 106° heat multiple times as I scrambled to fix shit. But yeah... that van is fine. Everyone's fine here. We're all fine here now, thanks. How... are you? 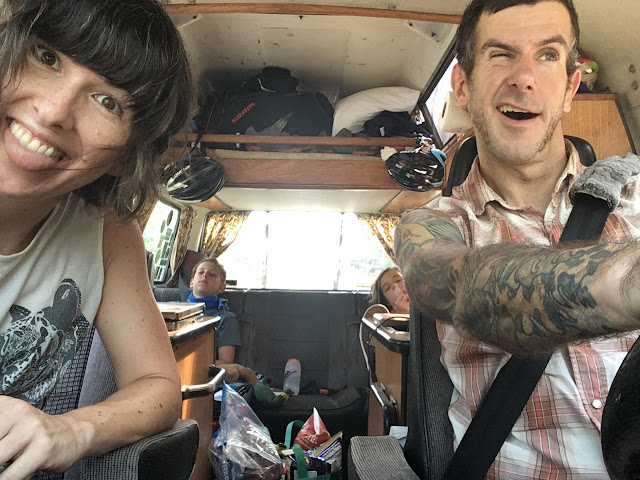 A: Yeah? I mean... I have my ongoing column in Dirt Rag. But otherwise? I've been a in a major rut. Like my muse bailed. I sit down to write just about every night. Sometimes I get something out that I save for later. Some nugget of idea. But mostly I just "select all" and hit "delete."
At some point I just started hating my voice. It became all consuming.

Q: Self-loathing likes to do that.

A: Even now.... This. This absurd little exercise to trick some stupid words out. It just seems like so much self-indulgent bullshit.

Q: Maybe. But no more so than the act of simply having a blog and thinking you have something to say or that people should care.

A: But that's not why I ever write the blog. I write it to try and put thoughts, however poorly formed, into words. Translate energy into matter.

Q: Or just probe your own prodigious mental vomit with a stick to see what the fuck is in there?

Q: Shit, I can tell you that. Hot dog. Big unchewed pieces of hot dog.
So I heard you're doing a kit.

A: Yeah. I always wanted to do something that wasn't really tied to REVOLUTION CYCLES. Just because. So I just branded this one REVOLTING COGS.

Q: Do you have any idea how fucking vain that is? Assuming anyone wants to be associated with this shit show of... whatever the fuck it is you do?

A: Ok... Truth? I just wanted a new kit to ride in myself. When I first talked to Stratton at Starlight, I was just going to do a super secret run of like... four kits. Two for me... One for my kiddo. And one for... whoever. He talked me in to doing a "team store." 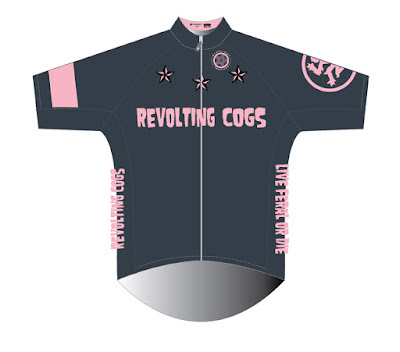 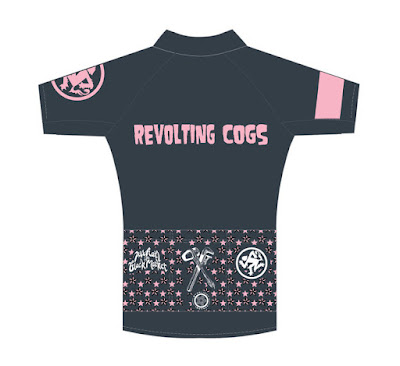 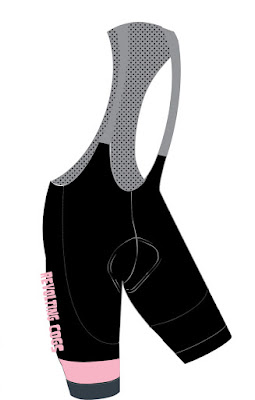 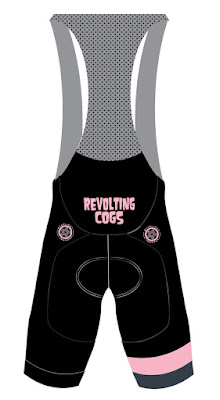 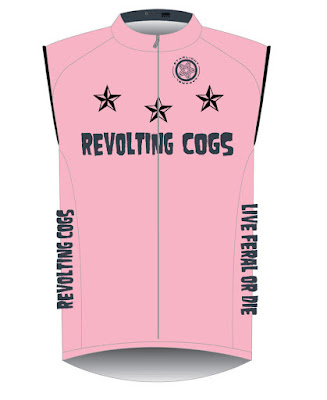 Q: So what does it mean?

A: What it's always meant... A Revolting Cog. Some part of the machine that isn't in sync. That resists.

Q: So it's political?

A: No. But it isn't NOT political. Because it's me.
It's funny... the other day at the shop some folks were talking about the kit and saying they were probably going to order one. I told them I appreciated that very much. And I do. So much. And the question was posed: Would I be ok with them even wearing my kit? Because we probably don't agree about politics?
And... they're right. We don't.
So the real question is: are they ok wearing my kit?

Because here's some politics:
Fuck every fucking hole in that fucking fuck Kavanaugh's fucking fuck face.
Every.
Fucking.
Hole.

Q: And fuck white male apologists. And men's rights activists. All of them.

A: Exactly. What are you scared of? That you'll suddenly be treated the way you've always treated everyone else? Fuck your fragile and toxic masculinity.
Hmmmm.... you know... maybe calling you my enemy before was hasty. Maybe you're like... a good frenemy. I don't know. It's easy to reduce people to reactions. Take some facet of them and make a narrative of it. It's always more complicated than that, right?

Q: Yeah... What's that stupid word? Sonder? "The idea that each random passerby is living a life as vivid and complex as your own." That we're all struggling with something.

A: Yeah. But we're also all just ignorant and boring pieces of shit who think more of ourselves than we should.

Q: Indeed we are.